Some thoughts on Bible Translation and the Textus Receptus 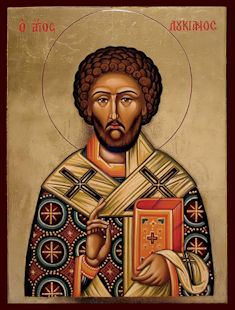 At the end of the 3rd century, St. Lucian of Antioch, known as Lucian the Martyr, compiled a Greek text of the New Testament that became the dominant text throughout Christendom.  It was produced prior to the Diocletian persecution (about 300 AD), during which many copies of the New Testament were confiscated and destroyed.  After the Emperor Constantine came to power early in the fourth century, the Lucian text was propagated by missionaries and bishops from the Antiochan school throughout the eastern Empire, and it soon became the standard text of the Eastern Church, and formed the basis of texts produced in Byzantium (later Constantinople).

From the 6th to the 14th century, the great majority of Greek New Testament manuscripts were produced in Byzantium.  In 1525 Erasmus, using five or six Byzantine manuscripts from the 10th to the 13th centuries, compiled the first Greek text to be produced on a printing press, and this has subsequently been known as the Textus Receptus (or Received Text).  The translators of the King James Version had around 5,000 manuscripts available to them, and most of these were based on the Byzantine manuscripts and Erasmus’ compilation (Textus Receptus).

By the 1800’s archaeological discoveries were turning up manuscripts that were substantially older than the ones used by the King James translators, in particular the Codex Alexandrinus (Alexandrian manuscript), the Codex Vaticanus (so named because it is housed in the Vatican Library) which has been dated to the 4th century AD), and the Codex Sinaiticus (the Sinai manuscript) which is mostly identical to the Codex Vaticanus.  All three of the critical texts include at least part of the Septuagint (LXX) for the Old Testament.

B.F. Westcott and F.J.A. Hort began work in 1853 that resulted in a Greek New Testament based on these older manuscripts.  Their work, published in 1881, has been a major influence in most modern translations such as the ASV, RSV, NRSV, NASB, ESV, and the NIV.  The Textus Receptus is available to us today through the 1550 Stephanus New Testament and the 1894 Scrivener New Testament.  These two texts as well as Wescott and Hort’s 1881 critical text can be seen among the Greek (Koine) translations at www. biblegateway.com

When one looks at the care with which the Textus Receptus manuscripts have been preserved and especially the consistency among them, I believe the Textus Receptus is worthy of greater consideration than scholars have tended to give it.  So how should we view the differences between the Textus Receptus and the critical text?  I notice that the differences between the two consist almost entirely of additional words or phrases in the TR that do not appear in the critical text.  So, we can choose to believe either that words from the TR were inadvertently or intentionally left out at an early point in the history of the manuscripts so that what we know as the older or critical manuscripts do not contain them.  Or we can choose to believe that the extra words in the TR were the accidental or intentional additions of later scribes.

Let me illustrate with three examples:

(1) Colossians 1:14 in the TR says “in whom we have redemption through his blood, the forgiveness of sins.”  The oldest manuscripts do not contain the three words, “through his blood.”  So did a careless scribe leave them out, or did a pious scribe, perhaps thinking of the identical words in Ephesians 1:7, add them?  In any event, the fact that we are saved through the death (by the blood) of Jesus is the clear teaching of the New Testament, so the doctrine is not dependent on this one verse.

(2) Acts 8:37 does not appear in critical texts.  But in the TR, when Philip explains the passage from Isaiah that the Ethiopian eunuch is reading and the eunuch asks to be baptized, the TR says: “And Philip said, ‘If you believe with all your heart, you may.’  And he replied, ‘I believe that Jesus Christ is the Son of God.’”  So which is it?  Did a careless scribe leave these words out, or did a pious scribe add them?  In this case, I think it is more likely that the words were added to the TR than that they were left out of the critical manuscripts.  But it is important to note that being saved by believing that Jesus Christ is the Son of God is taught many places in the New Testament, so no point of doctrine hinges on the presence or absence of this particular verse.

(3) Mark 16:9-20 does not appear in the oldest manuscripts.  Is it more likely they were left out of these oldest manuscripts or added to later ones by a pious scribe perhaps reflecting on some of the miracles in the Book of Acts?  Unless one wishes to advocate snake handling as a standard church practice, as they do in a few parts of Appalachia, it really doesn’t change any doctrines taught elsewhere in the New Testament.

It is important to note that advocates of biblical inerrancy always say the Bible is inerrant “in the original manuscripts,” which, of course, we do not have.  While some skeptics see this as a convenient dodge, I believe it is the only realistic and practical way to look at the question of inerrancy.  We can accept as an article of faith that God inspired the Scriptures in the beginning to teach us inerrantly all that he wishes us to know.  So while there may be small differences in manuscripts, they do not affect any point of doctrine.  Therefore we can be thankful that the Holy Spirit not only superintended the writing of the biblical manuscripts when they were written, he has overseen their preservation and transmission so that the Scriptures in any of the faithful translations that we have today are entirely reliable and trustworthy in all that they teach.

Addendum: In 2014, the Gideons International were looking for a new modern-language English translation to distribute alongside the venerable King James Version, which they continue to distribute.  They had been distributing the New King James Version, but Thomas Nelson publishers, which owned the NKJV was purchased by Harper Collins, and the Gideons were not able to reach an agreement to continue to use that version.  Crossway, publishers of the English Standard Version (ESV) offered to provide the Gideons with rights to use the ESV, which is a respected translation among evangelicals, but which is based on the critical text, not the Textus Receptus, which is the text underlying the King James Version.  The Gideons agreed to this arrangement, provided that they could work with Crossway to create a special edition of the ESV that included passages from the Textus Receptus that are omitted in the commercially published versions of the ESV and other translations based on the critical text.

Comparing the changes made for the Gideons to the ESV is a good way to see the differences between the Textus Receptus and the critical text.  If you are interested, you can see a table comparing the changes in this article: Gideon changes to the English Standard Version New Testament.