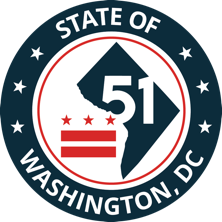 There is a petition going around to grant statehood to Washington, DC.  Proponents argue that "The United States is the only nation in the world with a representative, democratic constitution that denies voting representation in the national legislature to citizens of the capital.  In addition to paying federal taxes, District residents pay local taxes and bear all the responsibilities associated with citizenship."

The proponents even quote Vice President Pence, who supported statehood for the District of Columbia in 2009, when he was a Representative in Congress (prior to being Governor of Indiana).  They conveniently omit mention of the fact that Vice Pres. Pence has changed his opinion in the years since.

What proponents of statehood for D.C. don't consider is, if the US is the only nation that denies voting representation in Congress to its capital city, then why not abolish the District of Columbia and return the land and population to Maryland and Virginia?

A little history: The "Residence Act" on July 16, 1790, approved the creation of a capital district located along the Potomac River on the country's East Coast.  The U.S. Constitution provided for a federal district under the exclusive jurisdiction of the Congress and the District is therefore not a part of any state.  The states of Maryland and Virginia each donated land to form the federal district.

So returning the land and the people living on it to those respective states would give them voting representation in Congress.  Rhode Island may be a small state, but a one-city state with the voting power of a state is preposterous.  Why not the State of Chicago?  Or the State of Los Angeles?  Or maybe a separate state of New York, New York?

The population of Maryland is 6 million; the population of Virginia is 8.5 million, making them 12th and 19th among the 50 states.  The addition of 350,000 people would move Maryland up one notch and not move Virginia up in the rankings at all.  They can handle it.  And if they say they can't, it is most likely because they and the residents of Washington, D.C. want to add seats in Congress for one particular political party.  Care to guess which one?

(Before anyone objects, I readily admit my own biases in the matter.  But I also believe my argument stands on its own merits.)
Posted by Robert S. Munday at 11:18 PM No comments: