This past week saw the death of a giant among evangelical Christians. Who is John Stott? If you don't know, the best short explanation is perhaps the Op-Ed column from The New York Times written by David Brooks in 2004. Others may want to check out the obituary or the excellent tribute from Christianity Today or the "Opinion Roundup: Leaders and Friends Remember John Stott" from that same magazine.

John Stott was one of the greatest influences in my life as a Christian. I first encountered his thinking in the small book, The Baptism and Fullness of the Holy Spirit when, as a teenager, I confronted questions about this issue. This encounter led me to read Basic Christianity and, over the years, practically everything Stott wrote, eventually using his book, The Cross of Christ as one of the texts in teaching systematic theology at the seminary level and in numerous classes for laity. This book is, in my opinion, the best, most powerful, and most accessible treatment of the subject of the Atonement of Christ ever written.

While still a college and seminary student I had several opportunities to hear John Stott speak and to meet him. He influenced not only my understanding of my call to ordained ministry but also my pilgrimage from Baptist to Anglican.

In May of this year, Nashotah House conferred an honorary Doctor of Divinity degree on John Stott, who had received numerous similar honors in his lifetime. It was the hope of the graduating senior class, who recommended that Dr. Stott be nominated for the degree, that he would be our Commencement speaker. But his advancing age and declining health did not permit him to attend, so he received the degree in absentia.

I consider it among the high points of my deanship and presidency at Nashotah House that we were able to confer honorary doctorates on John Stott as well as another British evangelical leading light, Dr. J.I. Packer, who was our Commencement speaker in May 2009. If anyone had told me, when I was a college and seminary student, benefiting from their powerful teaching more than 30 years ago, that I would someday be signing my name on a diploma for either of them, I would not have believed it.

In the Anglican tradition we pray in each Eucharistic service the "Prayer for the Whole State of Christ's Church and the World." The traditional form from the Book of Common Prayer contains these words for the departed:

And we also bless thy holy Name for all thy servants departed this life in thy faith and fear, especially [names of those to be remembered], beseeching thee to grant them continual growth in thy love and service; and to grant us grace so to follow the good examples of all thy saints, that with them we may be partakers of thy heavenly kingdom.

We don't merely ask that the departed might rest in peace, we pray that they might experience "continual growth in thy love and service..." One could well ponder what that might look like for a faithful servant like John Stott. While, by God's grace (and Stott would be the first to acknowledge that it is only by God's grace), he has entered into the rest prepared for all God's saints, it gives one hope and a cause for rejoicing to think that he is still growing in the love and service of his dear Savior and Lord.

Posted by Robert S. Munday at 7:11 PM No comments:

"Pride Eucharist at the Cathedral"

St. James' Episcopal Cathedral, in Chicago, is the birthplace of the Brotherhood of St. Andrew (in 1883). My, how things have changed!

In case you can't read the fine print, it says the Eucharist will be "A Prayerful Celebration featuring the music of Lady Gaga and Cyndi Lauper." 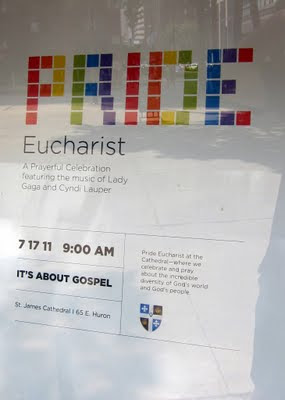 "…Because nothing says “prayerful” like the music of Lady Gaga and Cyndi Lauper."