The world lost the greatest theological mind whom most contemporaries have yet to discover when John Webster went to his eternal reward last week.

Webster had only as recently as 2013 joined the faculty of the University of St. Andrews, Scotland.  He began his studies at Clare College, Cambridge University, where he went on to earn a doctorate with a dissertation on the German theologian Eberhart Jüngel.  After teaching at St John’s College, Durham, from 1982-86, he spent ten years as Professor of Systematic Theology at Wycliffe College, University of Toronto, which is where I first had the pleasure of meeting him.

It has long been my contention, asserted in several posts on this blog over the years, that there are two ways to do systematic theology:  Either you approach it as a speculative discipline grounded in philosophy, or else you view it as a dogmatic discipline grounded in Scripture.  Which of these approaches you take makes all the difference.

Most academic theologians over the past two centuries have taken the former course.  I, along with theologians such as John Webster, chose the road less traveled.  Choosing the latter course doesn't mean that you ignore philosophy.  Webster's dissertation was on Eberhart Jungle, a philosophical theologian.  My own dissertation was an orthodox critique of  Process Theology--itself grounded in the philosophy of Alfred North Whitehead--and you don't get any more philosophical than that.

But the difference comes in where you see theology as being grounded and what you see as its source of authority.  It makes all the difference in your methodology and the conclusions to which you come.

Although trained as a philosophical theologian, Webster soon grew rightly suspicious of the prevailing liberal school in his own discipline; and the theologian who helped him find clarity was Karl Barth.  Writing in the Cambridge Companion to Barth, Webster said of his adopted mentor:


[T]heology was not, for him, simply one more academic discipline, but an aspect of the holiness of the church, the sanctification of its speech and thought.  He seems remarkably assured where many others have not even begun to establish their certainties.  He is immersed in the culture of Christian faith, intimately familiar with its great texts, themes, and episodes....  He persistently goes against the grain of some of the most settled intellectual habits of modernity.

Being steeped in the Scriptures and the great Tradition of Christianity led Webster, just as Barth before him, to another realization:  Truth in theology is the result of revelation, not discovery.  We may discover new insights about God in Scripture, but we do not discover (or invent) new truths about God, as would be the case if our understanding of God were the result of philosophical speculation, or in the empirical sciences where new discoveries often mean that new truth supersedes the old.

Webster's theological commitment put him squarely in what has become known as the Post-liberal tradition, and this is seen most clearly in the anthology he edited with George Schner entitled, Theology after Liberalism.   In the introduction to that work Webster wrote,


Postliberal theology has shown considerable interest in constructive rather than critical dogmatics… postliberals have undertaken a good deal of descriptive doctrinal work, giving renewed attention to the internal structures of Christian doctrine, offering expositions of doctrine which are not directed by apologetic concerns but by a sense of responsibility towards (and, one might say, delight in) the grand ideas of the Christian tradition.

Webster asserted that Postliberal theology is,


"… a return to ‘positive’ theology–theology which sees itself as reflection upon a positum, a given.  Postliberal theology has both emerged from and sponsored a re-reading of some of the great texts of the Christian tradition.  [It] gives priority to description over critical inquiry; matters of theological method are distinctly secondary.

This, Webster concluded, amounts to: "viewing theology as an aspect of the practice of Christianity."  It is perhaps too cynical of me to comment that many academic theologians would find this a novel idea.

Those who knew him and his work will mourn the loss of John Webster, a leading light of the Postliberal school, who departed this life all too soon (in human reckoning), at age 60, on May 25.  May he rest in peace and in closer fellowship with the God he represented so faithfully.  And may the Church benefit from his legacy by approaching theology as John Webster did. 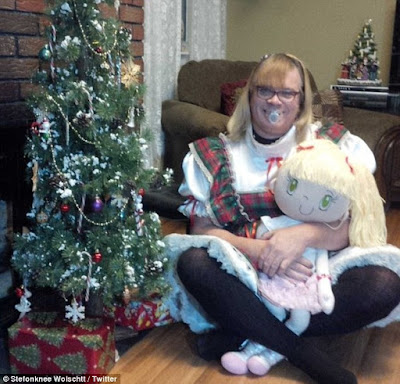 First the bathroom scandal; now this.  It seems like, no matter what the issue, Target cannot make a sane decision.  The company needs a housecleaning, starting at the top.  And until they select a corporate management team more in line with real American values, they aren't going to see one cent of my money.
--------------
In 2013, everyone agreed that Michael Turner saved the life of a teenaged girl who was attacked in a Pennsylvania Target store. Now, Target is suing him.

When she was sixteen, Allison Meadows was shopping in an East Liberty, Pennsylvania, Target store when Leon Walls rushed into the outlet and stabbed her.
With the assistance of surveillance video, Walls was convicted of attempted homicide for his attack on the girl.
The only reason the girl did not suffer more injuries is because Michael Turner interceded and, along with several other men, confronted Walls. Turner himself chased Walls out the store with a baseball bat.
Unsurprisingly, Meadows was extremely thankful for Turner’s efforts.
“I thank him,” Meadows has said. “I thank him every time I see him.”
But Meadows launched a lawsuit against Target, saying the store’s lack of security put all shoppers, not just her, in danger.
Target, however, is less grateful for Mr. Turner’s heroics. And now the retailer is suing him for “endangering” the store’s customers.
According to the company’s filing, Target says Turner and several others chased the suspect toward the store’s entrance after the attack on the girl. The store insists Turner put other shoppers at risk with his actions.
The victim of the stabbing and her family are furious with the retail chain and say Target is just trying to shift the blame away from its own security failures.
“Suing Michael Turner is just Target’s way of trying to blame someone else for what happened under their own roof,” the Meadows family attorney said. “The family certainly doesn’t blame Mr. Turner and they are thankful he was there that day.”
Target is already getting negative publicity; the chain is the subject of a major boycott effort due to its announcement that it is allowing men to use women’s bathrooms and changing rooms.
Despite the uproar over its decision–not to mention the loss of up to $6 billion in stock values—Target doubled down on its policy.
Posted by Robert S. Munday at 1:16 PM 1 comment: