...with the help of some major financial backers and national activist organizations, of course.

The New York Times is reporting on the controversy in Cranston, Rhode Island, over the display of a school prayer which has hung on the wall of the Cranston West High School auditorium since 1963, when a seventh grader wrote it as a sort of moral guide and that year’s graduating class presented it as a gift. It was a year after a landmark Supreme Court ruling barring organized prayer in public schools.

Jessica Ahlquist, now 16, a student at Cranston West who says she stopped believing in God at age 10, considers the prayer to be an affront. "It seemed like it was saying, every time I saw it, 'You don’t belong here.'" Apparently, her notions of rights and tolerance don't include tolerating the public display of anything that disagrees with her atheism, even the religious expression of the majority of people in her high school and her town.

The whole point of inclusivity, diversity, and tolerance is that we respect and make room for other people's perspectives, even when they differ from our own. Apparently these values are lost on Jessica Ahlquist, the Freedom From Religion Foundation, the American Humanist Association, and the American Civil Liberties Union when it comes to their campaign to eliminate the public expression of religious belief.

Jessica, is no mere "victim" but a determined activist with a website and a Facebook page devoted to her campaign to stamp out freedom of religious expression at Cranston West.

Here is the prayer Jessica and her backers sued to eliminate:

Yeah, that's really poisonous stuff. Many thanks to Jessica, the Freedom from Religion Foundation, and the American Civil Liberties Union for helping us eradicate such subversive and dangerous ideas from our public schools.

They are called the United States Preventative Services Task Force. And once Obamacare gets rolling, they will be the sole decider in what tests get full coverage with no co-pay under Obamacare and which tests go unfunded by your insurance carrier. Government intrusion into insurance coverage for abortifacient drugs and procedures is just the beginning.

From The Wall Street Journal:

Under ObamaCare, a single committee-the United States Preventative Services Task Force-is empowered to evaluate preventive health services and decide which will be covered by health-insurance plans.

The task force already rates services with letter grades of "A" through "D" (or "I," if it has "insufficient evidence" to make a rating). But under ObamaCare, services rated "A" or "B"-such as colon cancer screening for adults aged 50-75-must be covered by health plans in full, without any co-pays. Many services that get "Cs" and "Ds"-such as screening for ovarian or testicular cancer-could get nixed from coverage entirely.

That's because mandating coverage for all the "A" and "B" services will be very costly. In 2000, the Congressional Budget Office estimated that the marginal cost of similar state insurance mandates was 5%-10% of total claims. Other estimates put the cost of mandates as high as 20% of premiums.

Health plans will inevitably choose to drop coverage for many services that don't get a passing grade from the task force and therefore aren't mandated. Insurance companies will need to conserve their premium money, which the government regulates, in order to spend it subsidizing those services that the task force requires them to cover in full.

When Obamacare was being debated, Pres. Obama promised that "If you like your health insurance plan, you can keep your health insurance plan." We now know that that was a lie. Before Obamacare, your insurance provider would offer you a range of coverages, some procedures with co-pay, some fully covered, and some not covered at all. The key is that you, the consumer, would decide what coverages you wanted. Now the government panel will choose for you, and there isn't a thing you can do about it.

That is the insidious nature of Obamacare. If tyranny is the government robbing its citizens of the freedom to make the most basic choices regarding their life, health, and well being, then this is it.

I was having a conversation today with a friend in which I recalled that, some time ago, I had predicted that the Anglican Church of Canada would be out of business by 2030 and the Episcopal Church by 2050. Now, before people make wrong assumptions about my motivation in saying that, let me hasten to state that I make those predictions with great sadness, and without any trace of smugness or schadenfreude. If I didn't love the Episcopal Church, I wouldn't have joined it, after having ministered in another tradition for nine years. But the Episcopal Church took a hard left turn after I got on board and sailed straight into an iceberg. And though the icy water has yet to hit the boiler room, several decks have already taken on water, and the ship is listing.

What prompted my conversation today was the news that the portion of the Diocese of Quincy that remained in the Episcopal Church after the majority voted to leave, in 2008, is now contemplating merging (being absorbed, more likely) into the Diocese of Chicago.

Being from Southern Illinois and having been ordained in the Diocese of Quincy, I know that the people of Quincy have far more in common with people in the Diocese of Springfield than the Diocese of Chicago. Quincy and Springfield have even shared youth camps and clergy retreats for many years. So the merger with Chicago seems odd to me. What I suspect may be inclining Quincy to look at Chicago is a question about the long term viability of Springfield and a sense that all of Illinois will eventually merge back into one diocese (as it was prior to 1877) anyway.

The situation in Illinois is far from unique. The TEC dioceses of Fort Worth and San Joaquin will have to be merged into their neighbors as soon as the lawsuits against departing Anglicans are settled. Given declines in membership, sooner or later, El Camino Real and Northern California will probably merge back into California. San Diego will merge back into Los Angeles. Northern Michigan and Eastern Oregon should have merged with one of their neighbors a long time ago. Western Kansas and Kansas should have merged as well.

Fond du Lac and Eau Claire thought they had agreed to merge last fall, but a recount showed it failed by one or two votes. I imagine that there are those in Fond du Lac who breathed a collective sigh of relief that they managed to avoid taking on the financial burden that the merger would have most likely entailed. But eventually, just as in Illinois, the three dioceses in Wisconsin may find themselves merging back into one. What appears certain is that the decreasing viability of a number of dioceses across the US means that the likelihood of mergers (or "junctioning," to use the episcopally correct term) will only increase.

A lot of dioceses will wait until it is too late and eat up their endowments before they merge: Delaware, Easton, and Maryland; Long Island and New York; Connecticut and Rhode Island. One could easily make the case that all the dioceses in upstate New York (Western New York, Rochester, Central New York, and Albany) ought to merge. The Episcopal landscape is going to look a lot different in the coming years. But, based on my estimates (taking into account the average age of Episcopalians, no conversion growth, low birthrate, and poor retention of young people), things start imploding at an alarming rate after about 2018--and that's only six years from now.

When I say that the Episcopal Church will be out of business by 2050, I don't mean that every last Episcopal church will close its doors. Trinity, Wall Street, has enough money to operate in some form until the eschaton. All Saints, Pasadena, will continue to survive as long as there are liberals in Los Angeles who need religious validation of their lifestyles and political views. The same can be said for Grace Cathedral, San Francisco, although they will probably never have another dean who will succeed in pulling that off with such an unusual combination of gravitas and panache as Alan Jones.

The Proctor and Gamble endowments in Southern Ohio and the Eli Lilly endowments in Indianapolis, and a number of other examples elsewhere, will insure that Episcopal parishes in various places survive in some form. But, increasingly, the Episcopal Church will be a network of wealthy (but not necessarily well attended) parishes in various metropolises with very little in between. Thanks to the Consortium of Endowed Episcopal Parishes, these churches already have their network. But what it means for the Episcopal Church to exist as a denomination will change radically; and for people in many parts of the country, the Episcopal Church will simply cease to exist as part of the religious landscape. 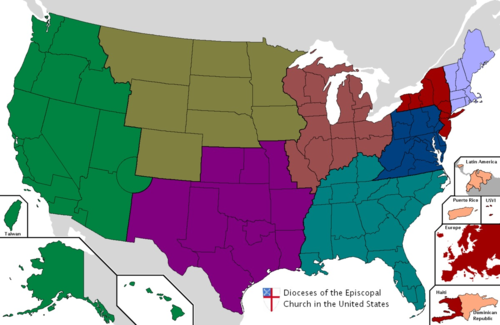 Another, more conservative possibility might see the Church merged into, for example, around 30-40 domestic dioceses, instead of the current 100, and look something like this: 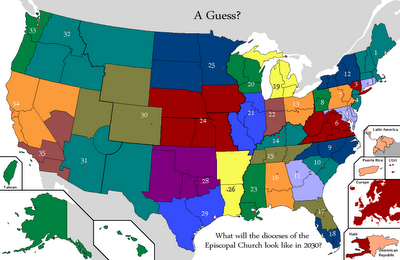 Let me make clear, this is just speculation. So if you live in, let's say, Mississippi, please don't write me and say, "But I don't want to be merged with Louisiana." It's just a guess. And it will probably be someone the age of your children who makes the decision in 18 years anyway. (That's six more General Conventions, for those who measure their life that way.)