You don’t have to be rich to give enough to change someone else's life. Just ask Barbara Cooke, who found out firsthand that $60 can go a very long way. Cooke decided for her 60th birthday to give $60 to each of her friends, who in turn were asked to "grow" the money and help out a charitable cause. She called it the Give60 Project.

"It was fantastic! For me, a person of faith, it was like observing the spiritual laws of giving play out, as different Give60 projects unfolded," Cooke, of Portland, Ore., told msnbc.com by e-mail.

"The givers often feel like they were receiving much more than they were giving. Many of the people involved have told me how they have shared the story of the project to others and that some of these people are now planning on doing their own version for a birthday, anniversary or other event in their life. How cool is that!"

Twenty-three different organizations benefited from the project, with several being gifted with ongoing, open-ended donations. "And our final total? $23,265, plus! Wow!" Cooke exclaimed.

Cooke was among dozens of msnbc.com readers who wrote in to share their own stories of how extraordinary giving by ordinary individuals can profoundly change lives.

The guys at Excentric have created a "digital" version of how the Nativity story might have played out if all the sites we use today happened to be around a few thousand years ago.

(You may want to click through to YouTube and watch a larger version of this video that you can see better.)

Posted by Robert S. Munday at 6:33 PM No comments:

From The Daily Mail (UK):

Christmas has been banned by the Red Cross from its 430 fund-raising shops.

Staff have been ordered to take down decorations and to remove any other signs of the Christian festival because they could offend Moslems.

The charity's politically-correct move triggered an avalanche of criticism and mockery last night - from Christians and Moslems.

Christine Banks, a volunteer at a Red Cross shop in New Romney, Kent, said: 'We put up a nativity scene in the window and were told to take it out. It seems we can't have anything that means Christmas. We're allowed to have some tinsel but that's it.

'When we send cards they have to say season's greetings or best wishes. They must not be linked directly to Christmas.

'When we asked we were told it is because we must not upset Moslems.'

Mrs Banks added: ' We have been instructed that we can't say anything about Christmas and we certainly can't have a Christmas tree.

' I think the policy is offensive to Moslems as well as to us. No reasonable person can object to Christians celebrating Christmas. But we are not supposed to show any sign of Christianity at all.'

Labour peer Lord Ahmed, one of the country's most prominent Moslem politicians, said: 'It is stupid to think Moslems would be offended.

'The Moslem community has been talking to Christians for the past 1,400 years. The teachings from Islam are that you should respect other faiths.'

He added: 'In my business all my staff celebrate Christmas and I celebrate with them. It is absolutely not the case that Christmas could damage the Red Cross reputation for neutrality - I think their people have gone a little bit over the top.'

How many times have we seen this? A group dumps Christmas in an effort not to offend a few people and ends up offending a lot more people. They just don't get it.

From the Milwaukee Journal Sentinel, where there is more:

Who can imagine losing a child so unexpectedly, as Mary and Kevin Coubal did in early September when their 11-year-old son Evan died of a head injury after a school playground accident?

Now imagine them turning their thoughts, through such heartache, to others in Evan's honor.

Evan was a sixth-grader at Bay Lane Middle School in Muskego, [Wisconsin] where his mom works as an administrative assistant. He was athletic, a baseball and football player, a boy remembered in loving tributes from hundreds.

When he died, his organs went to others. His liver went to a 7-month-old child. His kidneys and pancreas went to two women, 31 and 49. His lungs went to research. His heart valves were saved for reuse. His corneas restored the sight of two people.

Still the gifts continue in his name. When the Christmas Clearing Council opens its Waukesha-based toy store Saturday so hundreds of needy parents can shop for about 1,000 of their children, some of the credit goes to Evan.

Last Sunday would have been his "golden" birthday - 12 years old on the 12th day of the 12th month. So his parents organized a birthday party at Alpine Lanes in Muskego, complete with pizza and birthday cake and free bowling for anyone bringing a toy for the Christmas Clearing Council.

Mary Coubal said the alley owner began collecting toys for 12 days leading up to the party. Despite a winter storm that blanketed the area Sunday, the event gathered eight large boxes full of toys that will help stock the toy store shelves.

"He'd be amazed," Evan's mother said. Like the rest of us.

What Matters To Millenials: Pew Study

"The Millenial generation -- young adults between 18 and 29 years of age -- has made headlines as both a victim of its own apathy and the current state of the world. But the generation as a whole remains enigmatic. Millenials can't find jobs. They get married later than earlier generations. They live with their parents. They don't vote. They're not religious. They wait to have kids. So what actually matters to Millenials?"

See also this article: Religion Among the Millennials (From the Pew Center website.) 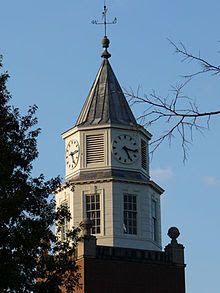 The clock tower at Southern Illinois University has played Christmas carols for nearly 15 years. But this year, someone complained – and that led university officials to briefly silence the holiday tradition until they could add a more diverse selection of music.

“We got a complaint about not being inclusive in the music,” university chancellor Rita Cheng told Fox News Radio.

She backed off comments she made to a local television station that claimed the music was indeed removed because it was “religious” and “offensive to non-Christians.”

“No one really complained about it being religious,” she told Fox News Radio. “They asked that their religion also be reflected in the music.”

A longer version of the story is here.

Alas, Southern Illinois University is where I earned one of my two undergraduate degrees (the one in Religious Studies and Psychology). It was a site of campus radicalism in the late 1960's and has always been inclined more toward political correctness than common sense. But silencing the carillon in the clock tower at Pulliam Hall because it played Christmas music makes me ashamed of and embarrassed for my alma mater.

If the University wants to do something to help students of other faiths to celebrate their holidays, that is a fine idea. But have you ever heard of a Hanukkah carol? How about a Ramadan hymn? And how good would Hindu music sound being played on bells in a clock tower?

The longer version of the article has the University Chancellor saying that "the university staff assured her they could add other religious songs to the chimes without taking away from the Christian element." Yeah, well, my other undergraduate degree happens to be in music, and all I can say is "Good luck with that!" (sarcasm intended). Most non-western music doesn't even use the same diatonic scale as western music, and wouldn't necessarily sound good even if you could get it to play. Ah, but there I go trying to interject common sense into a discussion that is obviously more about political correctness.

If you want to help students of other faiths celebrate their holidays, then do something that is appropriate to their tradition on their holidays. But carols on bells are a very unique way of celebrating a holiday that is special to most of your students, alumni, and local residents. So how about using a little common sense and let Christmas be Christmas.

I love bears. But this one gets a little too close for comfort.

It helps to know you can get the bear to go away with just a question. It also helps if you happen to be deer hunting and have a rifle or shotgun handy, just in case.

Posted by Robert S. Munday at 9:01 AM No comments: