John Rhys-Davies on political correctness, Islam, and the greatness of western civilization

Gimli takes an axe to political correctness in this interview:


But the real point is, if you play down the things that bind you, you weaken a society. If you do not believe that America is great, if you’re not allowed to say ‘My country ’tis of thee, sweet land of liberty,’ you will find sectional forces in your country trying to break it down. All countries have centrifugal forces trying to tear them apart. The way that you hold your society together is because you have that extraordinary document, the Constitution. Be very wary of people who seek to change the Constitution because it is the glue that holds your disparate peoples together.

Western Christian civilization, of which you’re a part, is one of the great glories of mankind. These are the things we stand for. We stand for liberty, liberty of association, freedom of speech. We stand for the equality of everyone in our society before the law, men as well as women. We could make a list of all the things. But let’s get back to respecting these things. These are the glories of our ancestors. These are what thousands of our ancestors died to protect and preserve. And if we allow those things to go because we are afraid of being politically incorrect, or of hurting somebody by suggesting that perhaps their value system may not be quite as nice as ours, then we are fools, and ultimately, scoundrels.

There's much more. Read it all.

Will the World End on October 7th?

Well, since it is now October 8, I think I can say, without fear of contradiction, the answer is, "No!" 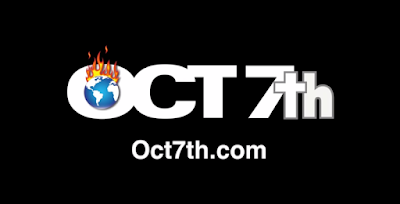 Chris McCann, the founder of the fringe Christian group eBible Fellowship, said the world was going to end on October 7, 2015.  He confidently claimed that the Earth would be completely “annihilated.”

According to McCann, God “shut the door to heaven” on May 21, 2011, meaning that "salvation is ended."  (I am wondering how he explains all those who have come to faith in Christ since then.)

But none of this means that McCann isn’t hedging his bets.  Looking at the website yesterday, I couldn't help but notice that they had a schedule of broadcasts posted for October 8th and the days following.

Of course, in making this prediction, McCann is simply adding himself to the list of those down through history who have predicted the end of the world.

There comes a point at which orthodox Christians must say "Enough!" to foolishness of this sort.  Why?  Because our Lord is going to return and the world is going to end someday, and the Scriptures have much to say concerning that end.  Scripture tells Christians to be watchful and to be ready.  But it also admonishes us, "But about that day or hour no one knows, not even the angels in heaven, nor the Son, but only the Father" (Matthew 24:36).

Just before his Ascension, the disciples asked Jesus, “Lord, will you at this time restore the kingdom to Israel?”  Jesus replied, “It is not for you to know times or seasons that the Father has fixed by his own authority (Acts 1:7).

The damage done by Christians who purport to know the date of Jesus' return or the end of the world is that it brings the legitimate prophecies of those events, the totality of the Bible, and even Christianity as a whole into disrepute.  Misguided teachers seeking the limelight end up making the Christian faith the subject of jokes and ridicule.

As one who teaches systematic theology, I firmly believe that we are called to teach about eschatology—the study of prophecy and the end times.  And as a pastor I know that we are called to be prepared, sober, and vigilant.  But part of being "sober" in this context means that we are commanded to avoid those things that "promote controversial speculations rather than advancing God's work—which is by faith" (1 Timothy 1:4, 1 Timothy 6:4, 2 Timothy 2:14, Titus 3:9).

My advice to Mr. McCann and other end-time speculators: Preach the Gospel, win souls for Christ, build up his Church.  It may not get your name in the media as much, but it will bring more glory to Christ, which is what Christian ministry is about in the first place.