THEOLOGY: FAIL - What happens when you don't understand the Atonement

But the blogosphere and even major media outlets are buzzing over the sermon delivered last Sunday by the Rev. Sarah Kinney Gaventa, Associate Rector of St. Paul’s Episcopal Church in Ivy, Virginia.  The appointed text for that Sunday dealt with St. Peter's confession in response to Jesus' question, "Who do you say that I am?"  And Peter responded, "You are the Christ, the Son of the living God."

Somehow, Ms. Gaventa managed to jump from one of the richest texts in the four Gospels to the shooting of Michael Brown by a police officer in Ferguson, Missouri, earlier this month.  After listing other cases in which unarmed black men have been shot by law enforcement officers, Ms. Gaventa denounced “systematic” racist white behavior in education, social media, and law enforcement—chalking it up to an “infection” of “white privilege.”

But she was just getting warmed up.

Gaventa’s final remarks reportedly outraged the congregation, when she equated Michael Brown to Jesus, implying that Brown, like Christ, was a sacrifice for our sin:


The God we love came to disrupt the power structures of the world that tell us what we are worth. He is a living God, who loved us so much and was so grieved by our inability to love him and one another, that he was willing to become human.

He became Michael Brown. He became the victim of our sin, so we wouldn’t have to sacrifice each other any more. His sacrifice should have been the last. His sacrifice was enough for us. And yet, here we are.

Personally I blame the state of theological education in Episcopal seminaries, and the Episcopal Church in general, which has been confused (at best) about the Atonement of Jesus Christ for decades!

Just for the record, contra Ms. Gaventa, Jesus was (and is) the unique incarnation of the eternal second Person of the Trinity, the Son.  He became incarnate not merely to be a teacher and the prophesied Messiah of the Jewish people, but to be the Lamb of God who takes away the sins of the world.

Jesus did not die as the victim of our sins; he died as the unique, once for all, sacrifice for our sins (I Peter 2:24a, 3:18; 2 Corinthians 5:21; Romans 5:8).  His atoning death, agreed upon by in advance by God the Father and God the Son (Acts 4:27), paid  the penalty for our sins and removed the barrier that separated sinful humans from a holy God.

Will the Episcopal Church ever recover sound theology?  Apart from a miracle and a revival sent by God, no.  Ms. Gaventa is only living out the kind of confusion regarding the Incarnation and Atonement of Jesus Christ that is routinely taught in the seminaries of the old-line denominations today--seminaries which have a disdain (and even contempt) for biblical and traditional Christian understandings of these doctrines. 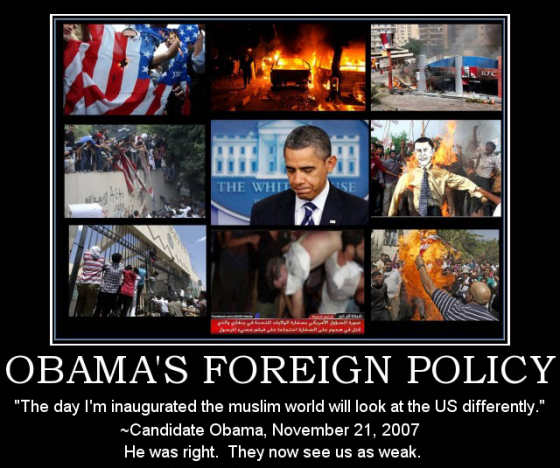 It really defies belief--the gutlessness, the indecision, the incompetence—in the face of a new global terror!

From the Associated Press:


President Barack Obama on Thursday promised to expand U.S. humanitarian relief to Iraqis threatened by the advancing army of the Islamic State militants.  He took credit for alleviating the genocide threat [Oh, really?  You mean the threat has been eliminated?] to thousands trapped on a mountaintop but said the situation "remains dire" throughout the country.

Translation:  "Things are really awful in Iraq right now, but we are committed to doing nothing until we are absolutely certain that whatever we do will be too little, too late."

"Obama said no emergency evacuation on Mount Sinjar is now needed, and he said it is unlikely the U.S. military will continue to airdrop food and water there."

Translation: "Yeah, one airdrop was enough to solve the whole problem.  Those several hundred thousand Iraqis and Kurds who have been displaced from their homes are just going to have to wait; I have a golf date to keep."


Obama gave no indication he intends to shift from the limited, defensive military campaign he announced last week to one designed to use American might to push back and eventually defeat an emboldened Islamic State army, which has made rapid and broad advances across western and northern Iraq since June.

Translation: "Because I am more afraid of what my liberal base will think of me for getting the US into a land war again than I am concerned about the plight of millions who are being threatened by this new terror."

"We're going to be working with our international partners to provide humanitarian assistance to those who are suffering in northern Iraq wherever we have capabilities and we can carry out effective missions like the one we carried out on Mount Sinjar without committing combat troops on the ground," Obama said in a statement.


Translation, "Because we are not the leaders of the free world anymore.  We don't do nuthin' without the French and the Dutch goin' along with it."


His remarks highlighted the gap between the administration's increasingly dire assessment of the threat posed by the Islamic State group and the limited air campaign it has so far undertaken, which military officials acknowledge has had only a temporary, local effect and is not likely to blunt the group's momentum or ambitions.

Translation: "The gap between our dire assessment of the situation and how little we have done is because I really don't know what the heck I am doing.  I just wish these folks would hold hands and sing "Kumbaya" until January 2017 when I am out of office."

On Wednesday, some of the most senior U.S. intelligence experts on terrorism briefed reporters in detail on the Islamic State group. They described a battle-hardened, well-funded terrorist organization that is bent on governing the territory it has seized in Syria and Iraq while also encouraging attacks in Europe and the United States.

"We assess that the group probably sees conflict with the United States as inevitable," one of the officials said, speaking, as the others did, under ground rules that he not be identified.

Translation:  "This is Nazi Germany in 1933.  We can see the threat.  We know what is coming, but we are going to wait until the enemy is so strong that it takes a World War to actually stop this hideous evil rather than confront it now.  Because, by then, this president will be on permanent vacation in Hawaii enjoying those wonderful presidential retirement benefits at taxpayers' expense."

Obama has said little about the potential external terrorist threat posed by the Islamic State militants, but he has been emphatic in his position that there is no American military solution to the insurgent threat facing Iraq.

["Mr. Obama, Neville Chamberlain is on the phone for you."]


The Islamic State group has its roots in another group known as al-Qaida in Iraq, which survived years of U.S. operations that diminished but didn't defeat it.  Nearly all of the Islamic State's leaders were at one point in American custody during the Iraq war, the officials said.

Translation:  "Yeah, we actually had these guys in custody.  But we let 'em go because, you know, Gitmo is just so uncool."

U.S. intelligence has concluded that even a new government in Iraq would need "external help" to make gains against the group and that neutralizing the Islamic State group would be unlikely without addressing its safe haven in Syria, where it has a headquarters. The Islamic State has access to oil revenues and other income sources worth several hundred million dollars a year, the officials said.

The officials said they still were unfamiliar with the structure of the organization and its total numbers, though U.S. officials have estimated the group is about 15,000 strong.

Translation: "That 15,000 is just a guess.  Frankly our intel on this whole situation hasn't been worth $%^*!"  We don't know how big they are.  We don't know where they are getting their money or their fighters.  We just know they are riding around in new Toyota and Kia trucks with their Islamic State decals on them like they were the Chicago police or something." 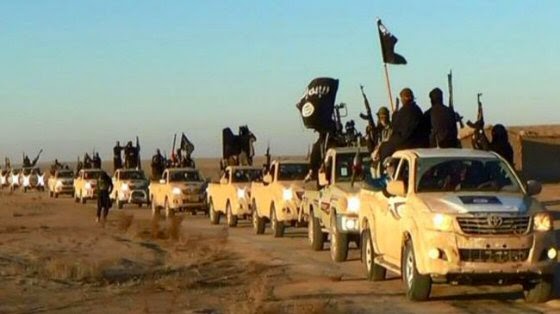 [Question: "Where were our forces while this 'parade' was going on?  One strafing run by an A-10 'Warthog' could have set the new 'caliphate' back a long way."]


Critics say the administration is only putting off the day when the U.S. will have to directly confront the Islamic State group, whose forces surprised and impressed U.S. officials with the speed and proficiency with which they overran Iraqi government forces at such strategic points as Mosul, the largest city in northern Iraq.

A U.S. intelligence official said a few hundred fighters from the group chased away a force of 50,000 to seize Mosul.

Translation: "Sure we can pull out of Iraq and leave them to defend themselves.  They'll be okay, really.  Trust me."

Joint Chiefs Chairman Martin Dempsey said last month he would present Obama with a long-term strategy to defeat the Islamic State, but officials have not described it. Even the nature and scope of further U.S. humanitarian relief missions in Iraq is unclear, but limited airstrikes continue.

Translation: "Ain't nobody gonna say nuthin' more about any 'long-term strategy to defeat the Islamic State,' cause if'n anybody knows I coulda stopped this thing and didn't, I am screwed."

The U.S. military said a mix of fighters and drone aircraft attacked two of the Islamic group's armed vehicles and a U.S.-made troop carrier, near the city of Irbil.  U.S. Central Command said the two armed vehicles were attacked after they fired on Kurdish forces, and moments later the troop carrier was hit near the site of the two previous strikes. The Islamic fighters have been operating U.S.-made equipment they captured from Iraqi army forces.

Translation: "I be likin' dem drones!  I am down with havin' our guys sit in a trailer outside Las Vegas and off those brothers halfway around the world.  Just so I don't have to do anything that causes my media buddies turnin' against me or nuthin'" 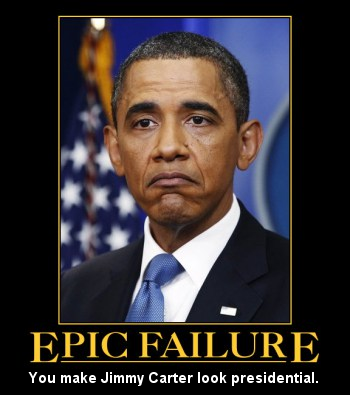 Posted by Robert S. Munday at 8:37 PM No comments:

Why I despair for America: "LA Residents Call 911 Over Facebook Outage"


Does missing your friend's latest baby picture constitute an emergency?  For some Los Angeles residents who reportedly called 911 to report that Facebook was down briefly on Friday, the answer is apparently yes.

Facebook was not accessible for a short time during "a widespread outage that affected users in multiple countries," according to Reuters.  Service was restored fully and the outage was being blamed on "a technical' failure rather than any suspicious activity," the news agency cited an unnamed source as saying.

But before all Facebook users were able to access the site again, some LA-area Facebookers seems to have thought the interruption of their social networking fix was worthy of a call to emergency dispatch, the Los Angeles Times reported:

Sgt. Brink later indicated that the calls to 911 about Facebook being down weren't just from one individual but appeared to have come from multiple social media junkies, though he didn't name the number of calls received.

How does one even begin to comment on a news item like that or what it says about our society?