Spare me the gurus, please.

Reading the news on Sunday can be a trying experience. The media usually think we have had enough of finance and politics during the working days of the week; and so, except for a couple of political talk shows on the television networks, the print and internet media usually think it is time for feature stories--the sort we can read while enjoying a leisurely Sunday brunch and come away feeling that, more than mere facts, we have perspective!

So, in contrast to Monday's stories that will usually give me a preview of what is to come during the week, whether on Wall Street or Capitol Hill, midweek stories that tell me about unfolding events, or Friday's stories that give me a wrap of the week's developments, Sunday's news is aimed at giving me culture.

This is, at least for me, often a trying experience. As one who generally tends to regard contemporary culture with a mixture of suspicion and detatched amusement, and who feels there is wisdom in the old adage that Christians are to be in the world but not of the world, as a youth I memorized 1 John 2:15-17,

Surveying the news headlines on a typical Sunday only tends to reinforce the wisdom of my conviction.

Today's stories are all aimed at giving us perspective on the death of Michael Jackson. I got on a plane on Thursday just as the news of Farah Fawcett's death was blaring over the airport television screens and got off that same plane greeted by the news that Michael Jackson had died. "How sad!" I thought. "A brave and compassionate woman's heroic fight against cancer (from which we all could learn something) has ended. But that news is going to be quickly eclipsed by the death of a self-destructive freak and child molester."

And sure enough, we are in full eclipse. Fawcett and Jackson died on the same day, yet by today Farah is nowhere to be seen, but the headlines are awash with stories on Jackson, especially dealing with the role that prescription drugs may have played in his death. It all looks eerily familiar. My wife and I lived two blocks from Graceland when Elvis Presley died. We've seen this before.

Article # 1 tells me that the Rev. Jesse Jackson (no relation to Michael) revealed that Michael Jackson's family wanted a second, private autopsy of the pop superstar because of unanswered questions about how he died.

"It's abnormal," Jesse Jackson said from Chicago a day after visiting the Jackson family. "We don't know what happened. Was he injected and with what? All reasonable doubt should be addressed."

Well I am certainly glad that the Rev. Mr. Jackson is there to hog the spotlight provide pastoral care. All the police, doctors, lawyers, agents, and real clergy surrounding the Jackson family were obviously incapable of dealing with this situation until Jesse arrived.

Article #2 takes me to a video of "medical doctor and spiritual advisor" Deepak Chopra giving his take on Michael Jackson's death, complete with photos taken of the two men together, in one photo even posing together wearing matching hats. How cute!

But the main feature on MSNBC, on this Sunday when the media wants to give me "perspective," is this story:

On marriage: Let’s call the whole thing off
Author Sandra Tsing Loh is ending her marriage. Is it time you did, too?

The story features a short video of Sandra Tsing Loh and psychiatrist Gail Saltz talking with TODAY’s Meredith Vieira about "the case against marriage" suggesting that "marriage made sense prior to 1900 when we were an agrarian society" but in today's more sophisticated, gender neutral society, marriage is outmoded--all because this particular woman who happens to be an author has decided that her marriage is over. And she is being held out as a guru for the rest of us. But not to fear: the story ends on an upbeat, hopeful note about marriage (the media know better than to depress their readers too much) and is followed by (surprise!) a series of stories on how couples can save their marriages and enhance their sex lives (with commentary from more media gurus), ending with a story on "shopping for a perfect husband" that concludes that a woman is better off with "an average looking guy who does the dishes." Okay, that's it. Guru overload. Closing my web browser NOW!

But since it is Sunday, the day of Christ's Resurrection, could there be a better perspective? Let's look first and foremost at the perspective of the One who created us:

"To God belong wisdom and power;
counsel and understanding are his.

If he holds back the waters, there is drought;
if he lets them loose, they devastate the land.

To him belong strength and victory;
both deceived and deceiver are his.

He leads counselors away stripped
and makes fools of judges. (Job 12:13-17)

How do we have God's perspective on our lives?

Remember your word to your servant,
for you have given me hope.
My comfort in my suffering is this:
Your promise preserves my life.

The arrogant mock me without restraint,
but I do not turn from your law.

I remember your ancient laws, O LORD,
and I find comfort in them.

Indignation grips me because of the wicked,
who have forsaken your law.

Your decrees are the theme of my song
wherever I lodge.

In the night I remember your name, O LORD,
and I will keep your law.

This has been my practice:
I obey your precepts.

You are my portion, O LORD;
I have promised to obey your words.
I have sought your face with all my heart;
be gracious to me according to your promise.

I have considered my ways
and have turned my steps to your statutes.

I will hasten and not delay
to obey your commands.

Though the wicked bind me with ropes,
I will not forget your law.

At midnight I rise to give you thanks
for your righteous laws.

So, spare me the gurus, please. And in the words of the gospel song, "Give me Jesus!"

(I hope you enjoy the beautiful video.) 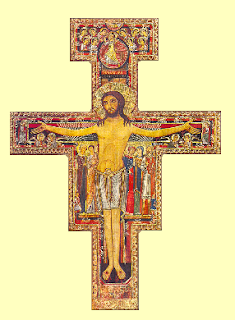 Traveling through Italy the past couple of weeks on Nashotah House's Archbishop Michael Ramsey Society pilgrimage, we spent a couple of days in Assisi, home to St. Francis. I found myself drawn to return more than once to the church of St. Clare, where, in a side chapel, hangs the large crucifix that once hung in the church in San Damiano. It was before this crucifix, in the summer of the year 1206, that Francis had the experience that sealed his conversion.

Francis had always possessed a heart that was concerned for God and for others, but he began to be increasingly convicted that his father's obsession with money, his mother's concerns for his health, and his own desires for sumptuous foods, lavish clothes, and extravagant parties were something he needed to renounce in response to the call of God for his life.

Francis frequently took walks in the countryside around Assisi, and one of his favorite paths took him past the church of San Damiano, a tumbling down, deserted chapel halfway down a steep hill outside the walls of the city. In this decrepit place hung a large, almost life size painted icon of Jesus on the Cross.

One summer day, in 1206, Francis was walking in the vicinity of San Damiano when he felt an interior tug of the Spirit to go inside to pray. Obeying the inner voice, Francis entered and fell on his knees before the familiar icon, his own spirit alert to what the Lord might wish to convey.

In eager anticipation, Francis looked up into the serene face of the crucified Lord, and prayed this prayer: "Most High, glorious God," he prayed, "cast your light into the darkness of my heart. Give me, Lord, right faith, firm hope, perfect charity, and profound humility, with wisdom and perception, so that I may carry out what is truly Your holy will. Amen." Ever more quietly he repeated the prayer, lost in devotion and wonder before the image of his crucified Lord.

Then, in the quietness, Francis heard Jesus speaking to him from the Cross: "Go, Francis, and repair my house, which as you can see, is falling into ruin." Another translation gives these words as, "Francis, don't you see that my house is being destroyed? Go, then, and rebuild it for me." In short, "Rebuild My Church!"

So Francis looked around at the crumbling church of San Damiano, gathered some of his friends together and rebuilt it. Then they went out and began restoring other church buildings in the vicinity of Assisi that were in need of repair. Only gradually did Francis realize that "rebuild my church" meant to reform the institution, to rebuild it by witnessing to the truth of the faith and calling people to renewed faithfulness to Christ and commitment to His mission.

As I spent time in Assisi last week, I had the opportunity to reflect on Jesus' call to Francis and what those words might mean for me today. Certainly as we look around we see a Church that is in need of repair and rebuilding--whether it is the institutional churches of "mainline Christianity" in America, or the Church as it exists in areas of the world that are deemed "post-Christian," or churches of all types in every place that are wracked by materialism, hedonism, apathy, and lack of commitment.

I believe that, in the midst of these circumstances, God is calling faithful Christians to rebuild the Church, (1) by renewing their own witness to the truth of the Christian faith, (2) by reflecting God's holiness and love to each other and especially to those who need to know Jesus as their Savior and Lord, (3) by giving visible expression to the unity of all faithful Christians whenever and wherever possible, and (4) by being the Church even when the institutional churches of which they are a part may fail at that same calling.

Almighty Father, whose blessed Son before his passion prayed
for his disciples that they might be one, as you and he are one:
Grant that your Church, being bound together in love and
obedience to you, may be united in one body by the one Spirit,
that the world may believe in him whom you have sent, your
Son Jesus Christ our Lord; who lives and reigns with you, in
the unity of the Holy Spirit, one God, now and for ever. Amen.