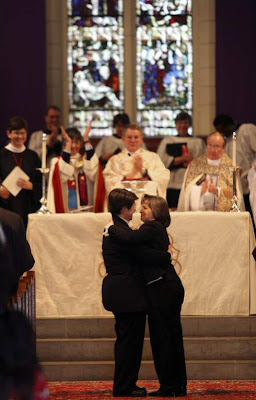 In case you aren't an Anglican, what you need to know is this: The Primates (leaders of the 38 regional and national provinces of the Anglican Communion) met in Dar Es Salaam, Tanzania, February 14-19, 2007. The Primates dealt with a number of issues; but, just as in the case of the two ancient controversies I mentioned above, this gathering of bishops dealt with a new controversy that is dividing the Episcopal Church and that threatens to divide the Anglican Communion: It is the issue created by the Episcopal Church's blessing of same-sex unions and ordaining persons living in same-sex relationships--an issue made most pointed by the Episcopal Church's consent to the election of a partnered gay bishop for the Diocese of New Hampshire, in 2003.

The Primates Communique outlined their concern:

At the heart of our tensions is the belief that The Episcopal Church has departed from the standard of teaching on human sexuality accepted by the Communion in the 1998 Lambeth Resolution 1.10 by consenting to the episcopal election of a candidate living in a committed same-sex relationship, and by permitting Rites of Blessing for same-sex unions. The episcopal ministry of a person living in a same-sex relationship is not acceptable to the majority of the Communion.

[W]e believe that there remains a lack of clarity about the stance of The Episcopal Church, especially its position on the authorisation of Rites of Blessing for persons living in same-sex unions. There appears to us to be an inconsistency between the position of General Convention and local pastoral provision. We recognise that the General Convention made no explicit resolution about such Rites and in fact declined to pursue resolutions which, if passed, could have led to the development and authorisation of them. However, we understand that local pastoral provision is made in some places for such blessings. It is the ambiguous stance of The Episcopal Church which causes concern among us.

The Primates then declared:

The standard of teaching stated in Resolution 1.10 of the Lambeth Conference 1998 asserted that the Conference "cannot advise the legitimising or blessing of same sex unions". The primates stated in their pastoral letter of May 2003,

"The Archbishop of Canterbury spoke for us all when he said that it is through liturgy that we express what we believe, and that there is no theological consensus about same sex unions. Therefore, we as a body cannot support the authorisation of such rites.".

The Primates went on to give the following admonition:

In particular, the Primates request, through the Presiding Bishop, that the House of Bishops of The Episcopal Church:
1. make an unequivocal common covenant that the bishops will not authorise any Rite of Blessing for same-sex unions in their dioceses or through General Convention (cf TWR, §143, 144)...

Well, it only took seven days for the Episcopal Church to show what it thought of the Primates injunction, as seen in this well publicized wedding at the Episcopal Church of the Redeemer, Morristown, NJ. Read the whole story. You get the idea from the picture above. And, as they say, a picture is worth a thousand words.
Posted by Robert S. Munday at 9:16 AM No comments: