Yes, Virginia, There Is a War on Christmas

From The Blaze where there is more:


A conservative legal firm fired off a letter to a U.S. Department of Veterans Affairs medical center on Tuesday in an effort to push back against a memo that was reportedly emailed to staff last week, effectively banning Christmas trees from display in public areas within the facility.

That decision was overturned following outrage, but the Alliance Defending Freedom, a conservative legal firm, is now requesting a written assurance that the medical center will respect the religious rights of its employees and of those it serves.

The veterans’ center, located in Salem, Virginia, purportedly said in the memo that staff members could only engage in ”private religious expression in their personal work areas that are not regularly open to the public” in an effort to be welcoming to all.

“The wording of the memo leaves open the possibility that employees could be punished for Christmas decorations or ‘merry Christmas’ greetings to veterans except in personal workstations that are out of public view,” reads a press release from the Alliance Defending Freedom.

Here’s the memo that was reportedly emailed to staff:

A copy of the memo that was reportedly distributed (Alliance Defending Freedom)
The document reportedly took specific aim at Christmas trees as well, with the text proclaiming that such decorations are unwelcome in public areas.

“Please note that trees (regarless of the types of ornaments used) have been deemed to promote the Christian religion and will not be permitted in any public areas this year,” reads a copy of the document that was posted by the Alliance Defending Freedom.

This World War II poster illustrates a lesson about ISIS that should be clear from the tragedy in Paris: 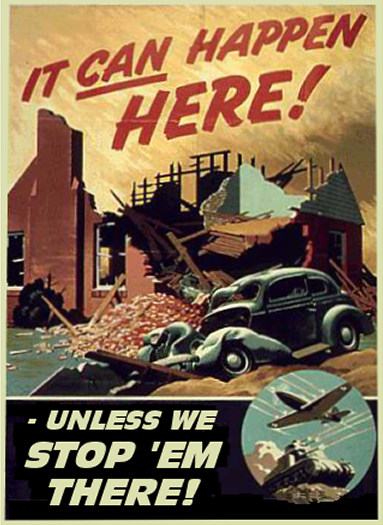 Posted by Robert S. Munday at 4:00 PM No comments:

I was in Savannah, Georgia last weekend for my last surviving uncle's 100th birthday.

Col. Munday turned 100 years old on November 1 and is still sharp, vigorous, and in good health.  In what I consider to be a real act of faith, he just bought a new computer.  He will probably outlast this one too.