Seriously.   I am not making this up.

It's on the Teleprompter!

By now, everyone with a television or computer has seen the video from the Democratic National Convention where they took three votes to reinsert God and Jerusalem into the Democratic Party Platform.  My opinion from the outset was that it was more honest for the Democrats not to mention God or to put phony language about Jerusalem in their platform (as long as Pres. Obama supports creation of a Palestinian State and wants Israel to return to its pre-1967 borders).  Furthermore, putting God's name in a platform that endorses the redefinition of marriage and unrestricted abortion is just window-dressing.  In fact, it is using God's name in vain.

Nevertheless, stung by public opinion regarding the omissions, the platform committee put forward an amendment to add God and support for Jerusalem as the capital of Israel back into the platform.  As numerous commentators have noted, the change did not seem to gather even a simple majority of delegates on a voice vote, much less the two-thirds majority needed to pass the amendment.

Convention Chairman, Los Angeles Mayor Antonio Villaraigosa, acted as if he didn't think the motion had the necessary two-thirds majority either. In one of the most awkward moments ever seen in a televised political convention, he had the delegates cast their voice vote three times.  Finally, looking nonplussed, Mayor Villaraigosa stated, "In the opinion of the Chair, two-thirds have voted in the affirmative, the motion is adopted, and the platform has been amended as shown on the screen."

The good mayor may have been from Los Angeles, but this Convention was being played according to Chicago rules: Keep counting the votes until you get the result you want.  Even the stalwart Democratic delegates on the floor responded to the ruling of the chair with boos.

But tonight, Sean Hannity added this shocking detail: the decision that Mayor Villaraigosa issued, declaring that the amendment passed, was scripted and already on the teleprompter!  This is the reason for Mayor Villaraigosa's awkwardness: in the face of a voice vote that obviously didn't carry, he already had his orders. It had already been decreed that the amendment would pass. 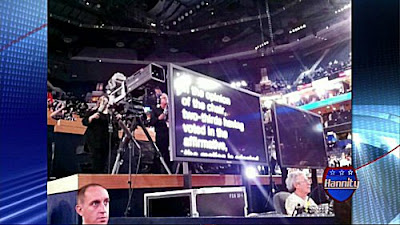 Posted by Robert S. Munday at 9:48 PM No comments:

Ben Stein Comments on Todd Akin and the Abortion Debate

From Ben Stein's column in The American Specator:


By the way, I am fascinated by this whole drama about Todd Akin and his strange comments about rape and abortion.  There is no doubt he said something extremely mistaken and offensive.  But there is also no doubt that he's standing tall against abortion when even his own party has turned on him.  Is there a braver candidate out there right now?  What are the merits and demerits of making a stupid comment on a TV show as compared with killing a baby because you don't like her sex or you want to move on with your career?

Somehow, in this brouhaha about Mr. Akin, the fundamentals of the issue have been lost.

Is it a good idea to have unlimited abortion?  Do unborn babies have no rights?  If not, why not?  The pro-abortion people have done a genius job of framing this debate in exactly the wrong way.  They always do that.  It's really about the taking of innocent life and not about miscues on a TV show.  [Emphasis mine.]

I live in Wisconsin, not Missouri, and I am not making a comment on the merits of Todd Akin's candidacy. But Ben Stein is right about losing sight of the fundamental issue.
Posted by Robert S. Munday at 6:04 PM No comments:

As one who proudly lives in what people on the east and west coast consider, "flyover country," I find myself hoping many of those people keep right on flying over.

Actress Kyra Sedgwick appeared on Tavis Smiley's PBS show this week where she discussed her recently concluded series "The Closer" on TNT. She said the series drew healthy audience shares in the Midwest but not in L.A. or New York City. At first, she said she felt insulted at this ratings truth, but it wasn't long before she realized this wasn't a bad thing at all.

Here's the video, but click on this link to read the whole article on Breitbart.com.