Last night I saw a movie I had somehow missed when it came out in 2005: The Island.  Once I realized the plot of the movie, my attention was riveted. 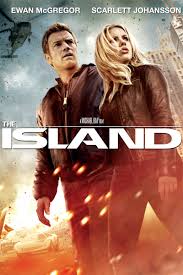 Lincoln Six-Echo (played by Ewan McGregor) is a resident of a seemingly Utopian but totally enclosed, underground facility in the year 2019.  Like all of the inhabitants of this carefully controlled environment, Lincoln hopes to be chosen to go to the "The Island" -- a paradise that is reportedly the only uncontaminated spot on the surface of the planet.  But Lincoln soon discovers that everything about his existence is a lie.  The earth's surface is not contaminated.  It is, in fact, very much like the earth we know.  He and all of the other inhabitants of the underground facility are actually human clones, being raised as "insurance policies" to provide organs and body parts for transplants to prolong the lives of their look-alikes on the surface--people who have no idea that the "tissue" and organs they receive are harvested from the clones.  Those inhabitants of the facility chosen by "the lottery" to go to the Island are actually selected to be killed when their organs are needed.

Lincoln makes a daring escape with a beautiful fellow resident named Jordan Two-Delta (played by Scarlett Johansson).  Relentlessly pursued by the forces of the sinister institute that once housed them, Lincoln and Jordan engage in a race for their lives to literally meet their makers and to let them know that their "insurance policies" are actually human beings who are being killed for their organs and body parts.

What compelled my attention was the similarity between this work of science fiction and the recent revelations of  Planned Parenthood's involvement in harvesting fetal organs and body parts.  As in The Island, Planned Parenthood perpetuates the myth that those from whom the tissue and organs are harvested aren't actual human beings.


I’d say a lot of people want liver.  And for that reason, most providers will do this case under ultrasound guidance, so they’ll know where they’re putting their forceps.  The kind of rate-limiting step of the procedure is the calvarium, the head is basically the biggest part.  Most of the other stuff can come out intact . . .  So then you’re just kind of cognizant of where you put your graspers, you try to intentionally go above and below the thorax, so that, you know, we’ve been very good at getting heart, lung, liver, because we know that, so I’m not gonna crush that part, I’m going to basically crush below, I’m gonna crush above, and I’m gonna see if I can get it all intact.

Is this not the most callous discussion of harvesting human organs you have ever read?

After an extended and exciting chase, Lincoln and Jordan eventually reach the home of Lincoln's clone donor (also played by McGregor), who in a twist of deception proves to be more interested in prolonging his life than in caring about where the necessary body parts come from.  I couldn't help but wonder if those who support Planned Parenthood's outrageous conduct could see themselves in this character.

Finally, Lincoln and Jordan break back into the underground facility in order to destroy it and liberate the residents, eventually being aided by the very mercenaries who were sent by the facility to track them down and kill them.  Even in science fiction, the idea of harvesting human organs is too repugnant for all but the worst villains.

Write or call your representatives in Congress and demand that they stop funding Planned Parenthood with our tax dollars.

I watched the movie begin shot in Detroit, they used my undercroft for the feeding station for cast and crew, and I was introduced to Ewan, Scarlett, and Michael Bay. Unfortunately, the move was billed as an action adventure movie rather than the futuristic horror film that it is. The moral implications of cloning has yet to be dealt with, but in the end, money is money and it thinks it can win.

Back in law school, almost 50 years ago, I participated in a joint med-legal ethics seminar with students from the medical school. One major discussion point was abortion (even before fetal tissue harvesting was a consideration). The primary question then as now was when does life begin - at conception or at some later gestational point where the fetus is "viable." By religious training,I came down on the side of conception, believing that the argument that life is only worth protecting if it is capable of independent functioning was equally adaptable to justifying euthanasia of the old and infirm. Where does one draw the line?