ACNA Archbishop Recognized as Primate in the Anglican Communion 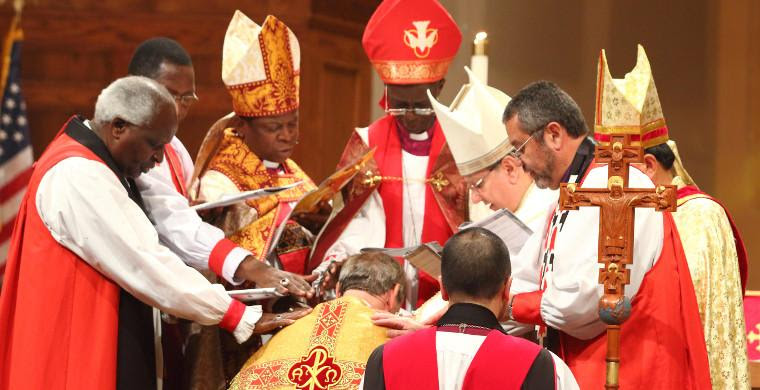 Archbishop Foley Beach was proclaimed a "Primate in the Anglican Communion" at his Investiture as Archbishop and Primate of the Anglican Church in North America before a congregation of more than 2,000 on Thursday night at the Church of the Apostles in Atlanta, Georgia.

Archbishop Beach was anointed for his office by Archbishop Eliud Wabukala of Kenya, the Chairman of the Global Anglican Future Conference (GAFCON).  The Oaths he undertook were administered by Abp. Nicholas Okoh of Nigeria, the Vice-Chairman of GAFCON.  Abp. Stanley Ntgali of Uganda, Abp. Onesiphore Rwaje of Rwanda, Abp. Stephen Than Myint Oo of Myanmar, Abp. Ezekiel Kondo of Sudan, Abp. Mouneer Hanna Anis Presiding Bishop of Jerusalem and the Middle East and Chairman of the Global South Primates, and Abp. Hector Zavala of the Southern Cone participated in laying hands on the new Archbishop.  Abp. Ben Kwashi and retired Abp. Greg Venables also took part.  The Primates of the Congo and Southeast Asia sent representatives.

In an apparent response to Welby's statement, the Primates from the Global South who participated in Thursday evening's Investiture have made it abundantly clear where they stand.