And you thought idol worship was dead?

More than 400,000 people turned out for the People's Climate March in New York City on Sunday, just days before many of the world's leaders are expected to debate environmental action at the United Nations climate summit.

The march began around 11:30 a.m., at New York City's Columbus Circle just off Central Park. At times, it stretched more than 4 miles as marchers carried banners, signs and entire contraptions depicting everything from Mother Earth herself to the dinosaurs that now make up fossil fuels.  Amidst all the lunacy that one person characterized on Twitter as the "biggest joke in history" came this float that people actually bowed, prostrated themselves and worshiped: 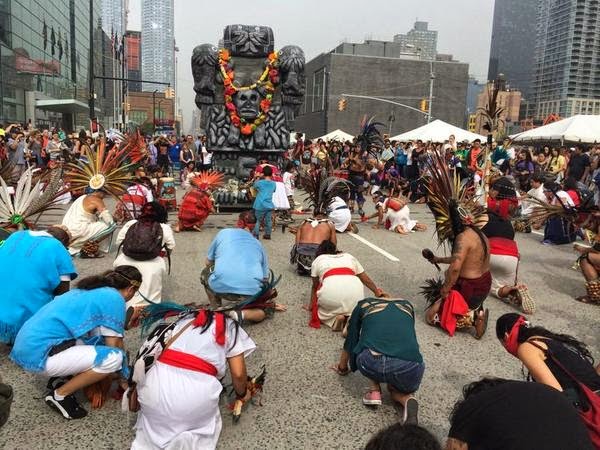 I suppose I shouldn't be surprised since things like climate change hysteria are what people turn to when they have lost their reason and are ensnared by the latest cultural fad.

Robert Kennedy Jr. was at the People's Climate March and even went so far as to suggest that those who oppose the notion of man-made global warming should be imprisoned.  (Did you ever notice how quickly and easily many liberals become fascists when you disagree with them?)  Thank God for the First Amendment!

So for Robert Kennedy Jr. and all the other false god worshipers out there, you might want to consider this:
I could go on, but you get the idea.  The disturbing thing is that people like Robert Kennedy Jr. want to put people in jail for refusing to bow to their false god of global warming.