It Only Takes a Girl

In 2005, Ben Stein delivered this commentary about the observance of Christmas on CBS Sunday Morning, with Charles Osgood.

CHARLES OSGOOD: We all have our own thoughts about the holidays. Here's Ben Stein with his. 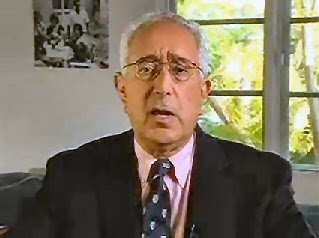 BEN STEIN: Here at this happy time of year, a few confessions from my beating heart. I have no freaking clue who Nick and Jessica are.

(Footage of People magazine; Us magazine)

STEIN: I see them on the cover of People and Us constantly when I'm buying my dog biscuits. I still don't know. I often ask the checkers at the grocery stores who they are. They don't know who Nick and Jessica are, either. Who are they? Will it change my life if I know who they are and why they've broken up? Why are they so darned important?

STEIN: I don't know who Lindsay Lohan is either, and I don't care at all about Tom Cruise's baby.

STEIN: Am I going to be called before a Senate committee and asked if I'm a subversive? Maybe. But I just have no clue who Nick and Jessica are. Is this what it means to be no longer young? Hmmm, not so bad.

Next confession: I am a Jew and every single one of my ancestors was Jewish, and it does not bother me even a little bit when people call those beautifully lit-up, bejeweled trees "Christmas trees."

STEIN: I don't feel threatened. I don't feel discriminated against. That's what they are — Christmas trees. It doesn't bother me a bit when people say 'Merry Christmas' to me. I don't think they're slighting me or getting ready to put me in a ghetto. In fact, I kind of like it. I shows that we're all brothers and sisters celebrating this happy time of year.

It doesn't bother me one bit that there's a manger scene on display at a key intersection at my beach house in Malibu.

STEIN: If people want a creche, fine. The menorah a few hundred yards away is fine, too. I do not like getting pushed around for being a Jew, and I don't think Christians like getting pushed around for being Christians. I think people who believe in God are sick and tired of getting pushed around, period. I have no idea where the concept came from that America is an explicitly atheist country. I can't find it in the Constitution and I don't like it being shoved down my throat. Or maybe I can put it another way. Where did the idea come from that we should worship Nick and Jessica and aren't allowed to worship God as we understand him? I guess that's a sign that I'm getting old, too. But there are a lot of us who are wondering where Nick and Jessica came from and where the America we used to know went to. [Bold type added.]

There are several versions of this floating around the internet, but this is the correct original, according to the official CBS transcript, and verified by Snopes.com.

Here's an encouraging video and story about young people being drawn to Anglicanism. Some of the news deals with nearby congregations in the upper Midwest.

Here are some of the points I took away from this brief video about what these young people are looking for in Church:


Did I miss anything?  What are your "take-aways?"

Posted by Robert S. Munday at 7:06 PM No comments:

Global Schism: Is the Anglican Communion Rift the First Stage in a Wider Christian Split?

Some of the nation's leading journalists gathered in Key West, Fla., in May 2007 for the Pew Forum's biannual Faith Angle Conference on religion, politics and public life.

Philip Jenkins, a Penn State University professor and one of the first scholars to call attention to the rising demographic power of Christians in the southern hemisphere, analyzed the ongoing schism in the worldwide Anglican church. While the dispute concerns attitudes toward homosexuality, Jenkins argues the core of the conflict lies in how biblical authority is defined. [Emphasis added.]

Will the current alliances between conservative Western and African leaders endure? Will African leaders begin to press an ultra-liberal economic agenda? Are other mainline denominations in the U.S. headed for similar splits? Jenkins answered these and others questions, while offering a fascinating glimpse into the life of African Christianity.

How to answer those questions? Here are my thoughts:

1. Will the current alliances between conservative Western and African leaders endure?

Given this week's developments in the Anglican Mission in the Americas, that is indeed a question. If Global South Anglicans were ever tempted to think of their western brothers and sisters as "Ugly Americans" this week's resignation of Chuck Murphy & Company from the Anglican Province of Rwanda and the events leading up to it cannot help but reinforce that impression. How will this eventually be resolved? And will this action by AMiA leaders cast a shadow on the Anglican Church in North America's relationship with the Global South? I pray not. But time will tell.

2. Will African leaders begin to press an ultra-liberal economic agenda?

No. Not in any way that will alienate them from their North American brothers and sisters. Still, North Americans need to try harder to understand the economic realities faced by those in the Global South and work constructively and cooperatively on solutions.

3. Are other mainline denominations in the U.S. headed for similar splits?

Southern Baptists, the largest Protestant body in the US, have seen their liberals (yes, liberals--not moderates--look at what they actually believe on all the major issues) depart into the Cooperative Baptist Fellowship. The Evangelical Lutheran Church in America (ELCA) has seen their conservative wing split after they followed Episcopalians and Presbyterians in ordaining gay clergy. The conservatives have now formed the North American Lutheran Church (NALC). The trend is sure to continue as other denominations face these issues.

But the critical question is the one in the title: "Is the Anglican Communion Rift the First Stage in a Wider Christian Split?"

In a nutshell, yes. Christianity is faced with a division of greater significance than the Protestant Reformation and even the Great Schism between East and West in 1054, as western, so-called "mainline" churches embrace secularist agendas and revisionist views of God, and reject biblical and historic Christian teaching on faith and morals.

There are those who will challenge me for saying this is of greater significance than the Protestant Reformation. I would say it is because they have not looked at what is really at stake. The Protestant Reformation was chiefly concerned with the nature of justification (sola gratia, sola fide) and the related issue of biblical and church authority (sola scriptura) although there were other issues as well. The division today is over the nature of God. You can follow in the direction of Sallie McFague (quoted approvingly by TEC presiding bishop Katherine Jefferts Schori, although she is far from alone among mainline leaders in embracing McFague's views) or you can hold that God has an objective identity that we know through revelation.

McFague's view is essentially this: God is a projection of our own needs, ideals, and imaginations, not a being with an absolute, objective identity that we can know. The classical Christian view is that God has an objective existence, that he has revealed himself to us in Scripture and in the Incarnation of Jesus Christ. I cite McFague, but she is only one example. The drift in academic theology from the objective to the subjective has taken place over more than sixty years. It includes Paul Tillich but goes back even farther, as theology moved from being a dogmatic discipline grounded in Scripture to a speculative discipline grounded in philosophy.

Then there is the division over the nature of the Bible. The revisionist view holds that the Bible is merely a record of human experiences of God. The Jews of the Old Testament had their guesses about God. The New Testament Christians had their guesses about God. And as these guesses worked themselves out in religious experience they became enshrined in a book. But, say those who hold this view, our contemporary guesses about God and our experiences are just as valuable as theirs, maybe even more so. This leads to the hubris that results in such statements as "The church wrote the Bible; the church can rewrite the Bible." For others it is not so much a matter of rewriting the Bible as interpreting it any way they please (they would say they are interpreting it in the light of "modern scholarship" or "contemporary experience") or ignoring it altogether.

What we are dealing with is a dichotomy as to whether Christianity is a speculative religion or a "revealed religion." In affirming revealed religion, I would point to two such unlikely allies as John Henry Newman and J. Gresham Machen. (Take time to follow the three links in this paragraph and to read both Newman's sermon and Machen's entire Christianity and Liberalism, and you'll be glad you did.)

The cry sola scriptura was once raised against a church hierarchy that twisted the interpretation of Scripture for its own ends. Today we must raise once again the cry sola scriptura against church hierarchies and liberal academia that have twisted Scripture to erect a god and a theological system that is of their own idolatrous imaginations instead of the God who was, and is, and evermore shall be, who has revealed himself in the Word of God written [Article XX] and the Word of God Incarnate, our Lord and Savior Jesus Christ.

This is a rift that has been growing for decades, perhaps for centuries, and that has resulted in two distinct (despite the attempts at camouflage) and incompatible worldviews. It is a rift that cannot be bridged because there is no middle ground. You have to choose.

When John Wesley was born in 1703, four million out of Britain’s five million people lived in absolute poverty—unless they found enough food for that day, they would begin to starve to death.

When John Wesley launched a Church Planting Movement in this context, he not only changed the eternal destinies of an estimated one million people who came to Christ through his ministry, he changed their economic status as well. Not only did the Methodists he led get saved, they got out of poverty and became a powerful influence in discipling their nation. Wilberforce and other “spiritual sons” of Wesley honored him as the “greatest man of his time.”

The Methodists made such an impact on their nation that in 1962 historian Élie Halévy theorized that the Wesleyan revival created England’s middle class and saved England from the kind of bloody revolution that crippled France. Other historians, building on his work, go further to suggest that God used Methodism to show all the oppressed peoples of the world that feeding their souls on the heavenly bread of the lordship of Christ is the path to providing the daily bread their bodies also need.