From PJMedia, where there is more:


To President Obama's legacy of foreign policy debacles, we can now add his landmark betrayal of Israel, carried out Dec. 23rd at the United Nations. By declining to wield the U.S. veto at the Security Council, by choosing instead to abstain -- by Vanishing-from-Behind -- Obama allowed the passage, by a vote of 14 in favor, 1 abstaining, of Resolution 2334. In the guise of condemning Israeli settlements, this resolution is configured to delegitimize and imperil Israel itself, America's longtime ally and the only democracy in the Middle East.

With that signal abstention, Obama abandoned decades of U.S. practice of defending Israel against the bigots and thug governments that routinely sit on the Security Council, including permanent members Russia and China, and their rotating sidekicks, such as Venezuela. As a Wall Street Journal editorial accurately put it, referring to the U.S. abstention: "What it reveals clearly is the Obama administration's animus against the state of Israel itself. No longer needing Jewish votes, Mr. Obama was free, finally, to punish the Jewish state in a way no previous president has done."


The Hagia Sophia is one of the most beautiful and well-known buildings in the world -- and Islamists have detested that fact for years.  After all, it is a Christian church, and therefore a Christian symbol.

That's why the Ottoman Turks wasted little time transforming the church into a mosque when they invaded and conquered Constantinople (Istanbul) centuries ago.  Christian symbols and works of art were destroyed or covered, and a dominating tower was built from which the Islamic call to prayer could be sung.

The Ottomans did that because they wanted to show Christians that, from then onwards, Islam was in power.  Christianity would be subjugated.

That changed in the 20th century, when the Ottoman Empire fell and was succeeded by the secular Turkish Republic.  The Hagia Sophia was declared a neutral place for Christians and Muslims (and for people of all other religions).  The church/mosque was made into a museum where everybody was welcome.

Just about everybody was happy with that situation -- except for the remaining Islamists.  Thankfully, fundamentalist Muslims were marginalized in the Turkish Republic.

Sadly, that has all changed under the rule of Recep Tayyip Erdogan, Turkey's current president.

Erdogan is an Islamist who believes that Turkey can only restore its old glory (note: the glory days of the Ottomans) by becoming a truly Islamist nation.  That's why nobody was surprised -- shocked, yes, but not surprised -- when the government announced earlier this year that the Muslim call to prayer would be sung twice a day in the Hagia Sophia from then on.

Christians and others criticized the decision, but Erdogan ignored them.  At best, he and the other members of the government said Christians had nothing to fear.  It was just a call to prayer, twice a day.  What's the problem?

Logically, Christians and other critics of the government had a hard time believing the president.  They feared that this was just the first step in a project to once again Islamize the Hagia Sophia.

This fear has now been validated: last Friday, the Turkish government announced that it had appointed a permanent imam to the Hagia Sophia.

This means that the Islamic call to prayer will now be heard five times a day, instead of two times -- and that it will basically function as any other mosque.

It's a tremendous slap in the face of Turkish Christians, who already are an increasingly beleaguered minority.

Earlier this month, Rev. Andrew Brunson and his wife Norine were arrested for supposedly being "national security threats."  That's an excuse this government always uses to take out those who don't support the president.  Brunson has been arrested because of his work for Christ.

Turkey's Islamist president is on a war path with Christians in Turkey.  Their churches are turned into mosques, their pastors are arrested and deported, and those Christians who remain are constantly forced to look over their shoulder.

Welcome to the New Turkey of Recep Tayyip Erdogan, where non-Muslims are soon to face the traditional Koranic choice of "convert, submit, or die."

Presumably, the reconversion of Hagia Sophia into a mosque means that these precious mosaic icons from the Byzantine Era will once again be plastered over. 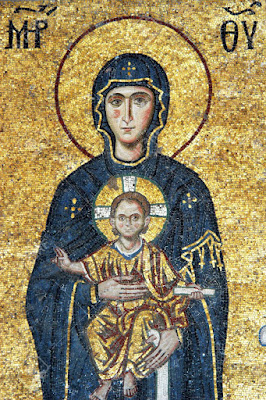 We need to pray that this marvelous edifice once again becomes a place where Christ is worshipped.
Posted by Robert S. Munday at 11:37 PM No comments: