A beautiful new hymn from Keith Getty—a composer who, in my opinion, is a modern-day Charles Wesley:

O breath of God, come fill this place;
Revive our hearts to know Your grace;
And from our slumber make us rise
That we may know the Risen Christ.

O Word of God, so clear and true,
Renew our minds to trust in You;
And give to us the bread of life
That we may know the Risen Christ.

O love of God, so unrestrained,
Refresh our souls in Jesus' name.
Let us reflect Your sacrifice
That we may know the Risen Christ.

May God the Father, God the Son,
And God the Spirit make us one.
In holiness let us unite
That we may know the Risen Christ.
Posted by Robert S. Munday at 7:43 AM No comments:

The blogosphere has been buzzing all week over the installation of Martyn Minns as Missionary Bishop in the Church of Nigeria for CANA—the Convocation of Anglicans in North America. Not surprisingly, conservative bloggers have been praising this action; liberal bloggers have been dissing it, as has PB, Katharine Jefferts Schori herself, who according to the New York Times, stated that “an invitation to episcopal ministry here without any notice or prior invitation” was not in keeping with “the ancient practice in most of the church...” So Katharine is finally concerned with adhering to the ancient practice of the Church. Let's hope this is the beginning of a trend.

But why all the fuss? It has been well over a year since the Synod of the province of Nigeria voted to set up CANA. Martyn Minns went to Nigeria to be consecrated a missionary Bishop on August 20, 2006. Surely these actions were more significant; and just as surely, last week's installation in Virginia was simply the next step along a predictable path.

Two observations, neither of which is original: (1) It happened over here. Nevermind that a priest from Virginia goes to Nigeria and is consecrated, just as long as nothing happens over here that might convince North Americans that they can be Anglicans apart from TEC. (2) The installation over here is starting to drive the point home that TEC's actions might actually result in consequences that matter.

Whatever the case, the reactions on both the right and left make it clear this is no small event.

How To Save A Life


How To Save A Life (lyrics) by The Fray

Posted by Robert S. Munday at 7:43 PM No comments:

Turning green? Make your own biodiesel fuel at home

Now here's something different: running a diesel car or truck on fuel made from recycled kitchen grease. Of course, if we all do this, there won't be enough restaurants to supply the used grease for recycling. But if this can achieve commercial viability, it's goodbye petroleum, hello biofuel! 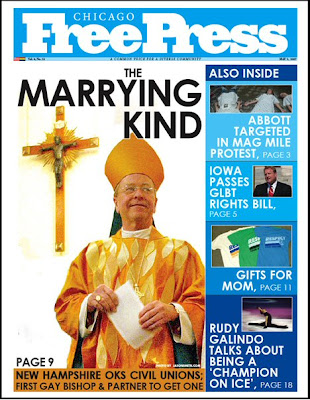 I was in Chicago today on Nashotah House's annual Church Tour. As our group was leaving one of the churches, someone pointed to a newsstand containing the Chicago Free Press, a local gay newspaper. The cover article vividly illustrated what other media reported earlier this week:

The Rev. V. Gene Robinson, the first openly gay bishop in the Episcopal Church, says he and his partner of 18 years will be among the couples taking advantage of New Hampshire's soon-to-be-signed civil unions law.

Now take a look at the last few posts on this blog:
1. The Presiding Bishop says, "it has become a vocation for the Episcopal Church to keep questions of human sexuality in conversation, and before not just the rest of our own church, but the rest of the world."
2. The ex-governor of New Jersey, who had to resign from office following admission of a homosexual relationship with an aide and who is divorcing his wife, has been accepted into an Episcopal seminary.
3. The bishop of New Hampshire, whose elevation to that office, coupled with the Episcopal Church's refusal to repent for that elevation, threatens to divide the Anglican Communion, now says he will marry his partner in a civil union ceremony, once the new law in New Hampshire goes into effect.

You have to admit it has been one helluva week--though exactly how you mean that statement will depend on whether you are for these developments or opposed to them. Whatever the case, it is becoming increasingly hard to deny that Gay Rights and the Millennium Development Goals have become the new Gospel of the Episcopal Church. It is also hard to deny that the leadership of TEC probably sees all of this week's events as good publicity.
Posted by Robert S. Munday at 10:37 PM 2 comments:

NEWARK, N.J. (May 3) - The nation's first openly gay governor has become an Episcopalian and been accepted into a seminary, according to a published report.

Former Gov. James E. McGreevey, who was raised as a Roman Catholic, was officially received into the Episcopal religion on Sunday at St. Bartholomew's Church in New York, said the Rev. Kevin Bean, vicar at the church.

McGreevey has entered the church's "discernment" phase, which usually precedes seminary work, Bean told The Star-Ledger of Newark in a report posted Wednesday on its Web site.

McGreevey, 49, shocked the nation in August 2004 by proclaiming himself "a gay American" who had an extramarital affair with a male aide, and said he would resign that November. The aide denies having an affair and claims he was sexually harassed by the former governor.

McGreevey has been accepted to study at the General Theological Seminary in New York, the oldest in the Episcopal Church, school spokesman Bruce Parker said Wednesday. "Mr. McGreevey has been admitted to the master of divinity program and he will be starting in the fall," Parker said.
Posted by Robert S. Munday at 10:15 PM No comments:

In an interview during a visit to Boston, Presiding Bishop Katharine Jefferts Schori compared the gay rights struggle to battles over slavery and women's rights, and said she believes that it has become a vocation for the Episcopal Church [emphasis added] "to keep questions of human sexuality in conversation, and before not just the rest of our own church, but the rest of the world."